As you know TypeScript is superset of javascript several new features are added and Object-oriented is one of them. Since, javascript does not implement the concept of Object oriented directly, Typescript does the ask easy by allowing the developers to write code in object-oriented way and the transpiler converstes the code into native javascript code.While working on Angular , you will see that you almost cannot work on any project without classes.

So, it's important that you understand this chapter properly before proceeding with the next chapter.

If you come from Java, C++ or C# or Object oriented PHP background, understanding this chapter will be a real eas.

But if you have no idea about object-and class. I advise you to  read this chapter properly.

A group of objects which has common behaviour and properties, is called class.

Object is an instance of the class.

Use the class keyword to declare a class in TypeScript. The syntax for the same is given below −


Class start with class keyword and followed by class name.

Once class is declared,Class name can have following entity.

So, combination of all these components are known as as the data members of the class.

Consider a class Person in typescript.

On compiling, it will generate following JavaScript code.


In the above example, we have declared a class called Animal. Since, Animal have some attributes like color, height etc. So, here I have declared color property variable with string data type.Remember one thing that while declaring any class property, var keyword is not used.

And then we  have declared a constructor. I have already mentioned above what constructor is all about.Here you can see, constructor have parameter called color.

Also, you may have noticed above, we have used  ‘this’ keyword which refers to the current instance of the class.

We have also declared walk() i function where we  have called the color property and displayed.


On compiling, it will generate following JavaScript code.

As you can see, transpiler of Typescript converts our Typescript code into Javascript code. Since Javascript directly does not implement class-object, it uses prototype chaining system, the code is converted into that Javascript readable code. And this code is more complicated as compared to the class object pattern.

The benefit is that  developer does not have to worry about the internal codding and they  can focus on familiar pattern of object orientation.

Once class is created we need to create instance of that class to access the data members of that class. ‘new’ keyword is used.

As mentioned above once object is created. You can access data members of that class through that object. So in our case  we can show the property of the class called ‘color’ with .()dot operator.

Here is the example :

//constructor with arguments and default values


The output of the above code is as follows − 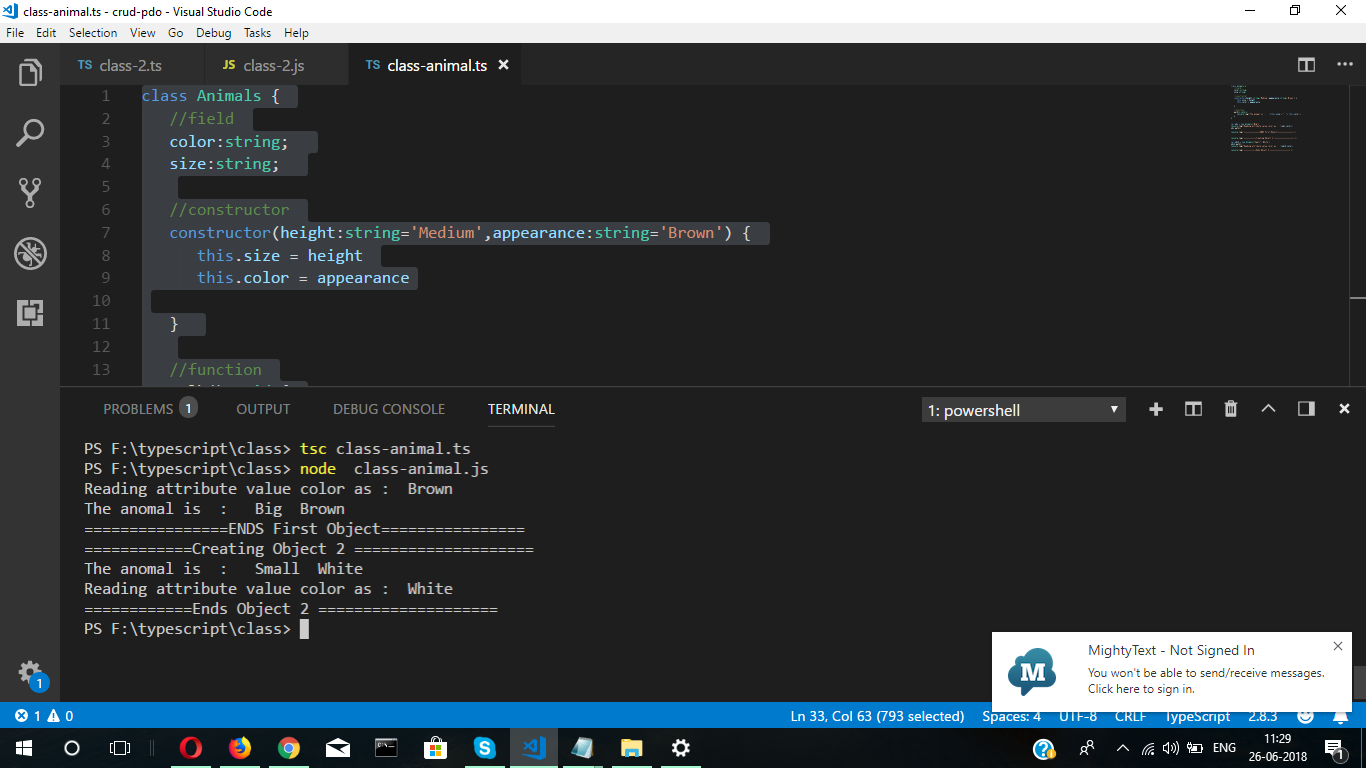 Inheritance is one of the mechanism where one or more classes inherits feature of base class with restriction or without restriction. As you have been reading since beginning of this TypeScript tutorial that TypeScript offers the concept of Inheritance.

Extends keyword is used for class inheritance. If you use extends that means  that child class is inheriting the data members of base class.

The output of the above code is as follows − 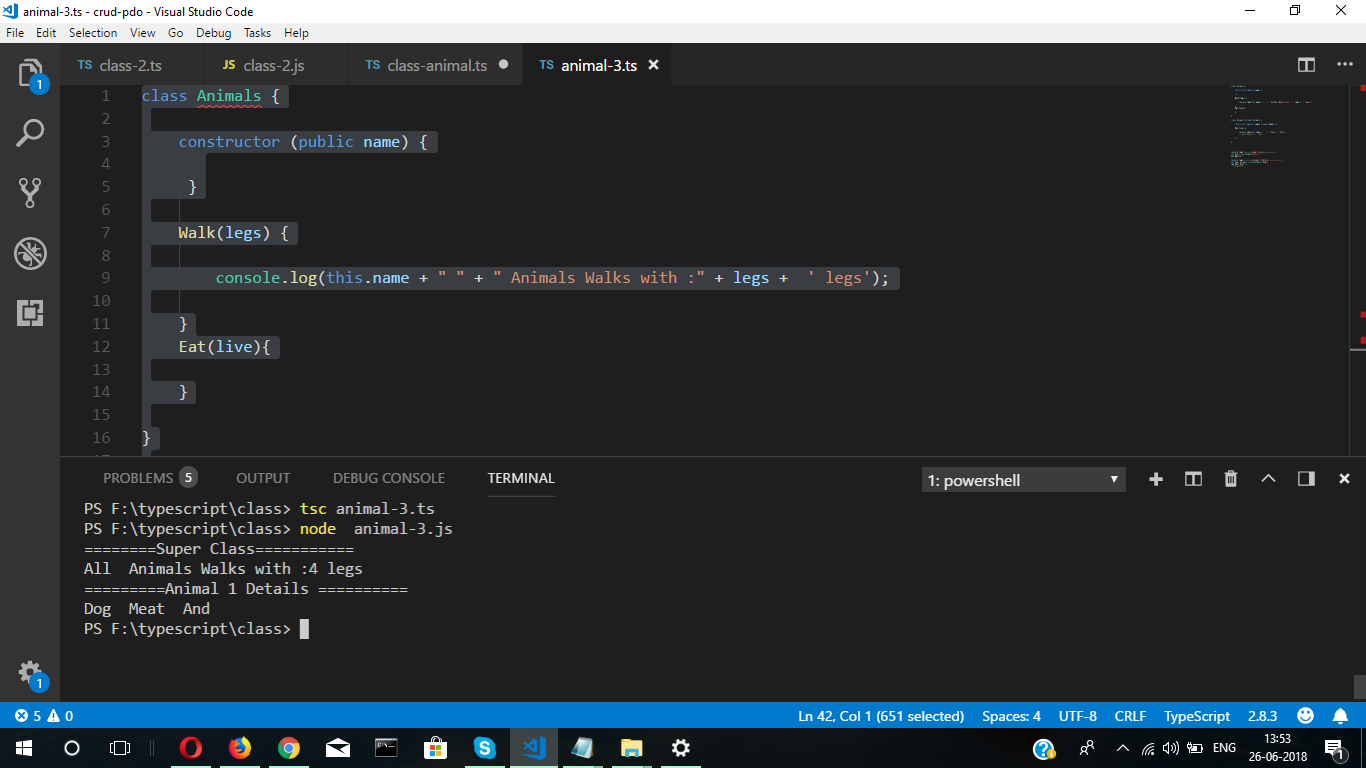 In the example declares a class Animals. And we have created another class called Animal1  which is inheriting class Animals. Now, all properties , methods can be accessed by class Animal1 of Animals internally.

There are following types of inheritance.

return "1. All cars has four wheels";

In the above program we have declared a class called ‘car’ and the Mercedez class extends  base class ‘Car’. And further Luxury car extends Mercedes car. All the classes have one common function called Features(). Also you may have noticed that two subclasses have super function which in turn hiddenly calls super base class constructor.

Its output is as follows − 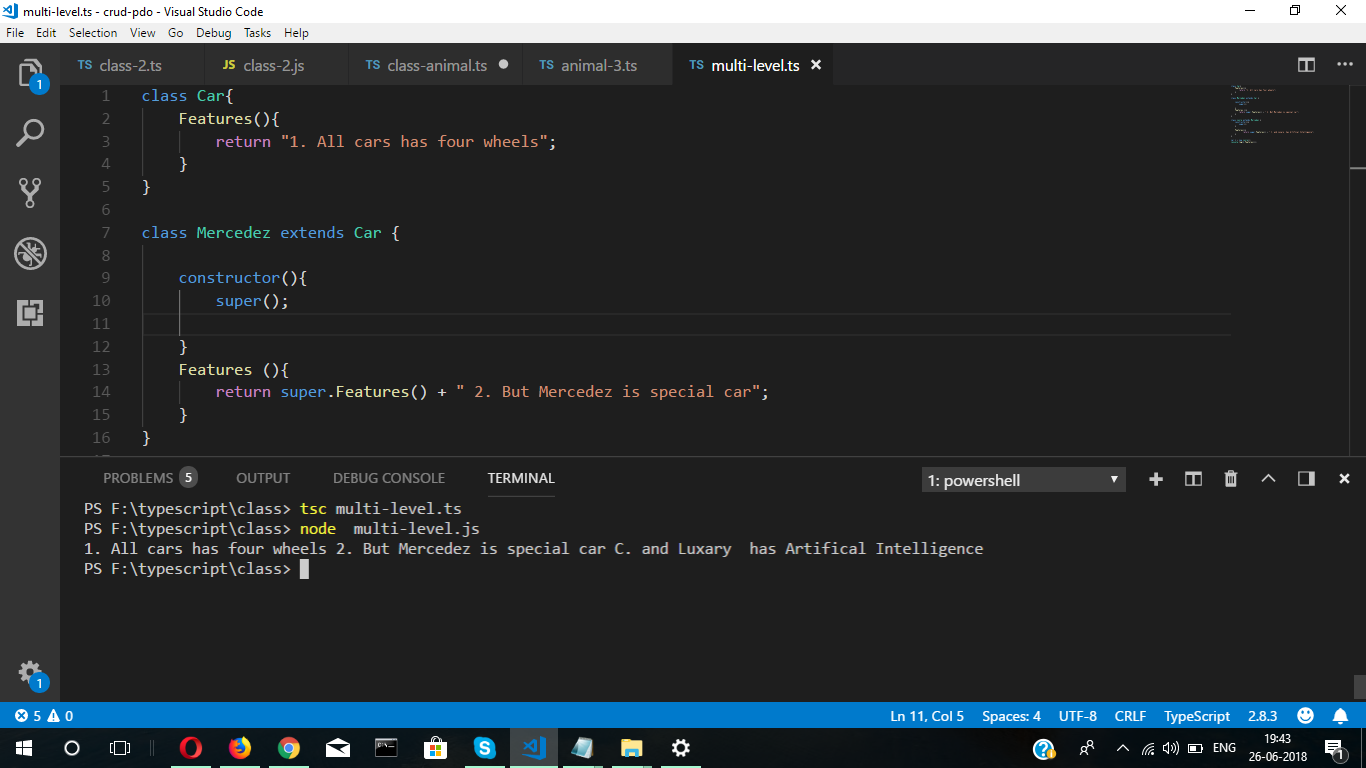 Method Overriding is a way in which  the base class redefines the superclass’s method. In this, base class and child class both have same method names. The following example illustrates the same −

In the above program you can see there are two classes. The base class name is Training. Inside that there is a method called Teach(). And then there is another class called OnlineTraining which extends base class training. Both have same method name called Teach. When object is created and called the function, by default the child class method is called first. If we need to show base class method, we have to write write super(). 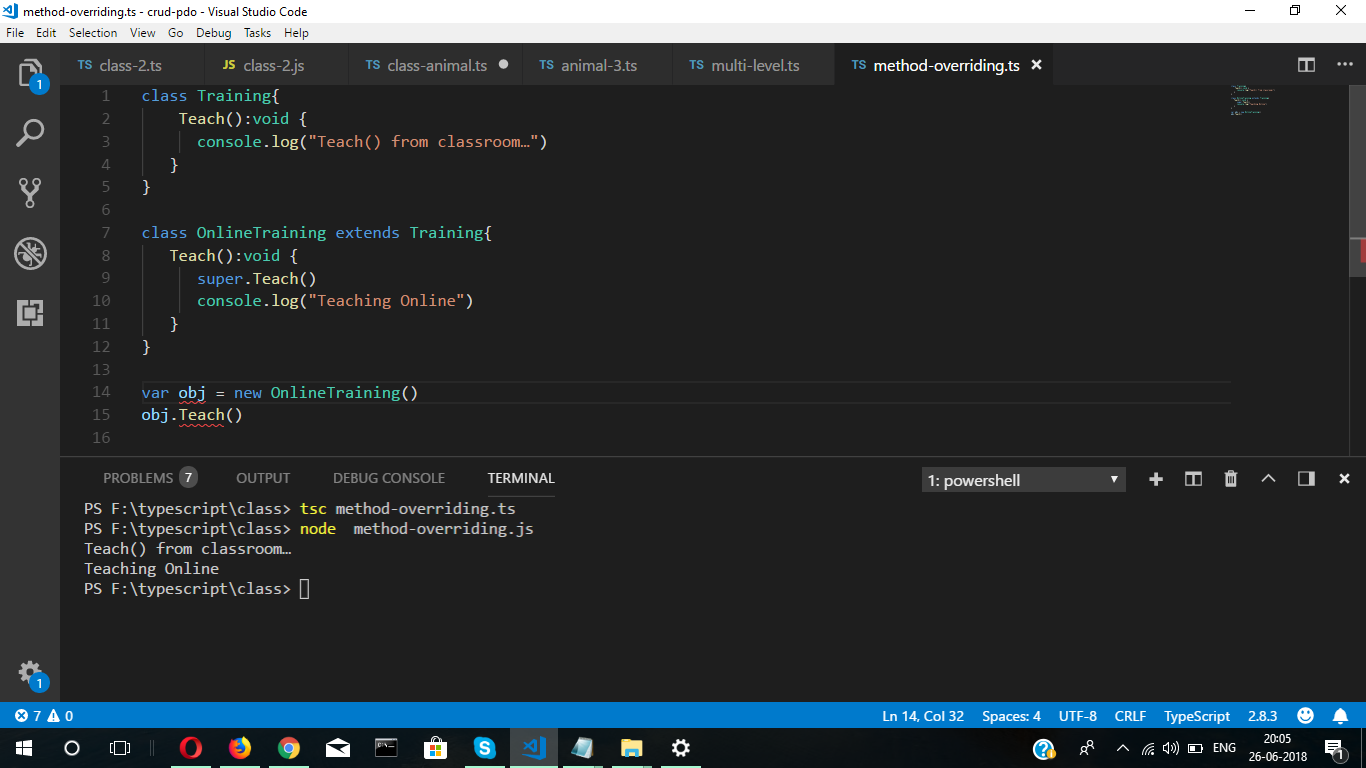 The static keyword can be applied to the data members of a class. When we declare a data member as static variable it holds its values till the program finishes execution. To access static members  we do not have to create object.

The output of the above code is as follows −

The instanceof operator is used to check if the object is of specified type.

console.log(" obj is an instance of Student" + isSt);


The output of the above code is as follows − 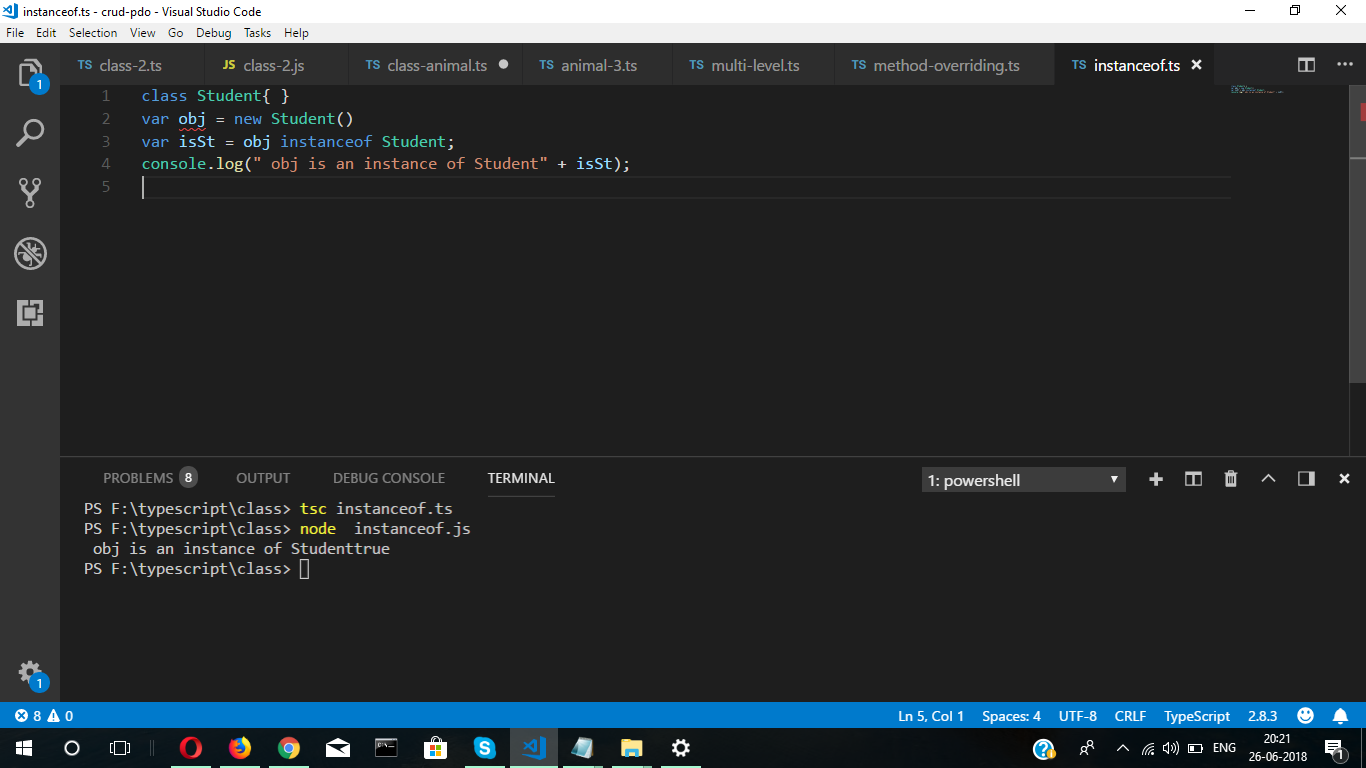 Access specifiers are keywords which is responsible for putting restricting the access of  data members by inheriting classes. The the data hiding is possible through these access specifiers. 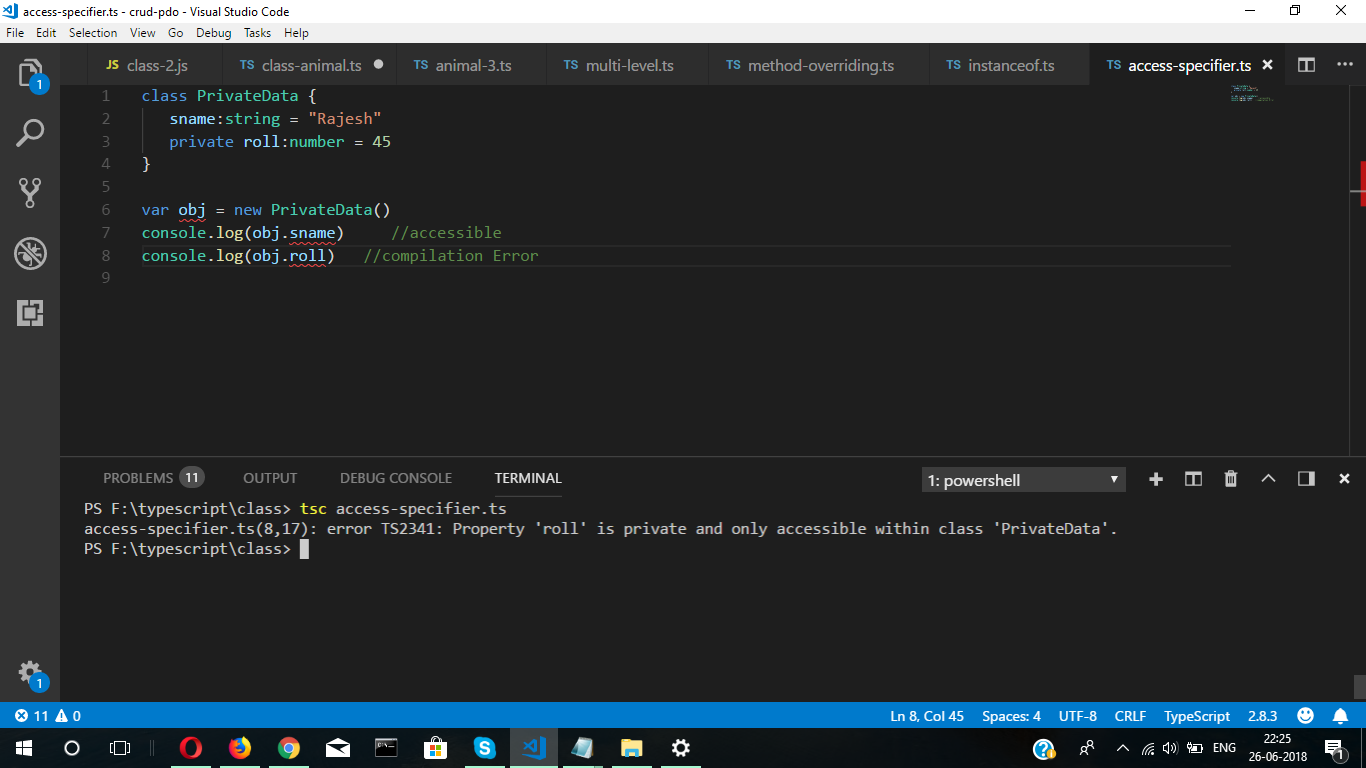 We have declared two variables one as public and other as private. If you don't write anything before any data member then by default it is considered  as ‘public’.

The other data member is declared as private and when that is tried to access  outside of class, it throws error.